This is Black History Month in the United States, a time set aside to recognize and honor the contributions of African Americans to the development of our country.

For the past three years, my church has hosted a musical event called The Love of Art, a concert honoring the late Art Porter Sr. (February 1934 – 1993). He was an African American Jazz musician born and reared in Little Rock, Arkansas. The concert is held to raise money for the Art Porter Foundation, which provides scholarships for young folks interested in pursuing music as their passion.

Chris, my wife whom I’ve mentioned previously in my blogs, sings with the Art Porter Singers. She had to arrive early for the concert to do a sound check, and whatever else singers and musicians do behind the scenes to prepare for concerts. Because we didn’t want to drive two cars to the event, I chose to go early with her. I’m glad I did because it gave me an opportunity to experience something that was apropos for the occasion.

As I was sitting in the foyer, listening to videos on my iPhone, a lady came in followed by a somewhat older lady. It was a daughter and her mother. The daughter had to use the lady’s room and she asked her mom to sit in the foyer until she returned. I overheard the daughter make some comment about the mom being ninety-four years old. That piqued my interest, along with the fact that this ninety-four-year-old woman walked into the building unassisted, albeit although with a cane.

I started our conversation by telling her, in all honesty, that she didn’t look ninety-four. She graciously thanked me. I said to her that I was sixty-nine, and I that had seen a lot of things in my years of being alive, but I bet nothing compared to her. I commented that she had probably seen the T-Model car and horseless carriages. She smiled and said she had not only seen T-Models but A-Models, too. Of course, if she had seen the T-Model, she would have seen the A-Model since it came after the T. From there, I was in awe of what sat before me, a living history book that could vocalize personal accounts of a good chunk of American history. From the short conversation we had, she mentioned the Great Depression of the 1930s. We talked about World war II, the Central Highschool crisis of 1957 and several other notable historic events. Her words were personal accounts from someone who lived the times and the events. This wasn’t, by the way, my first opportunity to converse with a living history book. My maternal grandparents were born much earlier than this lady; however, I never fully appreciated the value of the information they could have shared with me about the first half of twentieth century American history. I was young and driven by other, less valuable interest at the time. 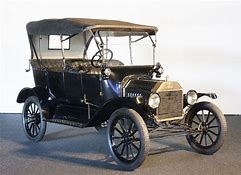 Shortly after our conversation had begun, the daughter returned. She thanked me for keeping company with her mom. I thanked her for giving me the few minutes I spent with her mom. With that the history class ended. That was real-life Black history, during Black History Month. How cool was that?

2 thoughts on “A brief visit across generations”