Here’s another one of those moments I often experience while sitting in church. We had a great preacher today from South Africa, the reverend Mpendulo Christopher Machi, pastor of Saint Peters Baptist Church in Maigate Township, South Africa. Pastor Machi is also President of the National Baptist Convention in South Africa. This was interesting to find out they have a national organization like what we have in the Unites States.

Though I was interested to see and hear Pastor Machi, I must admit I was a bit curious about how his presentation would go over with us westernized folk of African ancestry. After all, the old saying about “if it looks like duck and walks like a duck” doesn’t always apply. I wondered how thick his accent would be; how effective his metaphors used in preaching would translate; how comfortable he would be standing before members of the African diaspora descended from captives kidnapped from the continent of Africa. I also thought how both he and we have suffered from the effects of European colonization and brutality.

Brother Machi entered the seating area of the pulpit, while the congregation was praising God with our normal hymns and other activities that are preambles to the apex of the service, preaching. I found his stature to be attention focusing. He’s a small man, light brown in complexion, well dressed in a three-piece gray suit, appearing quite western in over all image. No surprise here. After all, the Dutch, and the English have applied a heavy hand on the indigenous people of South Africa to have them appear western from the outside.

As Pastor Machi approached the rostrum to speak, he did so with what appeared to be the same confidence as any of our “preachers in residence.” When he first spoke, the accent was there. I had no problem understanding anything he said. Of course, I found myself paying closer attention to every word he uttered. I couldn’t afford to take one minute of mental vacation. I found this to be more of a benefit than a hindrance. Being in a more focused mode of listening resulted in even greater absorption of what was being shared from the pulpit. During his first few minutes of speaking, he mentioned that he normally preached in Zulu, with an interpreter. He said that presenting his sermon strictly in English might be somewhat of a challenge for him. If it was, I couldn’t tell. 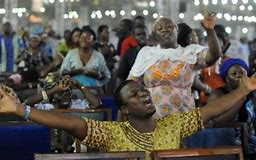 The sermon, brother Machi delivered was textually based on Luke 5:17-26, titled “When Faith is at Work.” (This is the account of a group of men, anxious to have their friend healed, lifted him to the rooftop and let him down to where Jesus was speaking, because they couldn’t get through the crowd that was surrounding the house.) As he revved up his exegetical talents, I and the rest of the congregation were quite comfortable responding with the amen, glory to God and other culturally customary animations you would find in any African American Baptist church in the American South. All felt, at the end of the sermon, that an ocean and a continent apart had in no way diluted our Sunday morning ritual. What great preaching, what commonality, accent and other cross-cultural norms notwithstanding.