This morning, April 21, 2019 is Easter Sunday, according to most of the Christian world. As I leave home this beautiful morning for church, I hear a story on National Public Radio which has become so ordinary on the surface. (I hesitate to use the term ordinary, because of the loss of human life in large numbers; however, the slaughter of people does seem to solicit no more than an objective mention in news reports these days.) And the public response to these kinds of stories is no more or less matter-of-fact. But there is something significantly different about this story. The story is about some terrorist acts in Sri Lanka, which has claimed the lives of hundreds of individuals. Furthermore, the attacks seem to have been targeted at Christians. Easter, is the day of the year when Christians, are joyful, thankful and moved to glorify Jesus. It’s a day when life anew is celebrated. There is no room for the senseless death of any, especially Christians who have gathered in the spirit of praise and worship. 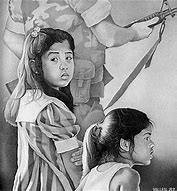 The stark irony of listening, on my way to church on Easter Sunday, to a story about the slaughter of Christians in Sri Lanka made it clear to me that inhumanity has no compassion, no sympathy, no shame. It takes shape wherever and whenever it desires. It cares little for the sanctity of human life and the idea that love, if given a chance would prove to conquer evil. The holy scriptures tell us the God has no favoritism, and that He loves the world (the people who populate it) so much that He gave up His Son for a sacrifice. Inhumanity, on the other hand, selectively reigns its horror on those who for some reason are deemed not worthy of life and joy. The sick irony of people losing their lives, in church on Easter Sunday, celebrating God’s victory over death is too tragic to ignore. It warrants more than a mere objectification by a news outlet.

The world aches, groans and contorts in agony as it suffers one calamity after another. Sure, there are earth quakes, massive fires caused by natural occurrences, and many other forms of destruction for which we have no control. However, whenever hate prompts one human, or a group of humans to wantonly take the life or lives of another or a group, it is an act for which control can be exercised. As I look at history, I often wonder why we haven’t erased ourselves off the surface of the planet. Then, I realize the grace of God is real, and it reigns supremely, providing providential protection over all.

The world continues in agony, a symptomatic state brought on too frequently by inhumanity. But, by the grace of God it continues.